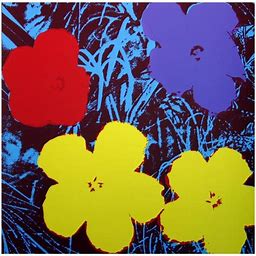 In 1928, Pittsburgh, Pennsylvania hosted the birth of a man that would soon change the face of modern art. Named Andrew Warhola, this was a man that was destined to rule Pop art and define its parameters, or most aptly, blur its lines. Andy Warhol paintings today are considered as priceless collectors item’s and even replica’s of his art work are considered as great additions to any home.

What fueled Warhol’s success was his paintings of pop culture and icons and this series began in the 1960’s. His first series of paintings were silkscreen images of cans of Campbells soup. This representation of everyday items was what spurred the pop art movement then. Warhol was seemingly showing the people how obsessed they were with consumerism and gave those everyday objects an iconic feel. Aside from the Campbells Soup Cans, Warhol also used other brands and images like boxes of Brillo, Coke bottles and even the American dollar bill.

The technique Warhol used, silkscreening, allowed him to do multiple images and use different colors and variances in the effect. This is what catapulted Warhol to stardom in the pop art world.

Already gaining recognition for his work, Andy Warhol then moved on from painting consumer images to concentrating on subjects which depicted the images of the popular figures in America in that era. This is when the famous paintings of Marilyn Monore, Jackie Onassis and Elvis Presley came to be. By that time, Andy Warhol’s paintings skyrocketed to popularity and he was producing paintings at a fast pace.

Exhibits of his works were being done everywhere and even overseas. Every image that he portrayed in his works became instant icons and he’s paintings was very much in demand. Warhol would soon use this new fund fame to cross the lines between commercialism and fine art, for which some people would wholeheartedly accept.

Warhol’s innovation in his works of art was by no means stagnant. Although he continued to make portraits of famous figures, moving on to Michael Jackson, Mick Jagger and others, he let go of his repetitive style that helped start his career. He still produced very colorful art works and moved on to different subjects that would shock yet delight the Art world.

Warhol’s paintings though were not entirely focused on the life of the rich and famous, he also dubbed with other themes and had some series of paintings as well that dealt with the social aspect of life. His series the death and disaster used heavily edited photographs and painted racism, electric chair executions, car accidents and such. Although these were not as popular nor as well accepted as his other paintings, the series still is a part of his genuine artistry.

Andy Warhol’s love for his pets also inspired a series of paintings dubbed as cats and dogs. An animal lover himself, Warhol painted cats that were photographed by a renowned cat photographer. And being a dog owner, he had two dogs at the least, he also produced images of his dogs.